g0v is a Taiwanese community born from crowd-funded, crowd-organized hackathons since the end of 2012. Out of frustration on a patriarchal, incapable yet strong-willed pro-China government, people of Taiwan came together to design and build civic technologies to push for information transparency between institutions and the public, committing an overwhelming desire to reimagine the government into action, thus the name ‘g0v.’

In the later years of 2013 and 2014, a bloom of activism and political movements swept across the island of Taiwan. Since the landmark event of a civic occupation of the national legislature, ‘318,’ protesting pro-China trade frameworks, political awareness among Taiwanese people has been on the rise. Among many activist groups and non-governmental organizations partaking this movement, g0v is distinctive in its fluid, decentralized organizing principles. Self-identifying as a ‘non-organization,’ g0v is composed of decentralized, collaborative projects operating on the principles of open-source software development.

Inspired by the people of g0v and the artist’s own passion on social transformation through collaborative communities, We the People is a temporal, site-specific project, taking over and reclaiming part of a government-funded art festival from a capitalistic production of art-commodities and personal fame. We the People repurposes the ‘exhibition’ into a demonstration and a social experiment of various ways of organization and collaboration, returning the curated ‘art space’ to the people.

We the People is comprised of three coexisting parts, Graph of Open-source Activism and Decentralized Communities (the Graph,) Collaboration Manifesto (the Manifesto), and Civic Square (the Square). The Graph, occupying half of the exhibition space, is a tangible and participatory representation of the virtual network of g0v projects, contributors, other linked communities, and their inter-relations. The Manifesto, transforming walls into a spatial, collaborative text editor, is open for everyone to co-write a manifesto declaring a future of collaborative mutualism. To ensure equal power between the artist and the participants, materials and tools used during installation remain in the space and are available for participants with minimal instructions. Finally, the Square is a declaration that marks the entire space to be open and free to all. Furnitures and equipments are provided to be freely rearranged for leisure, conversations, discussions, and gatherings. Hackathons, talks, workshops, event streamings, and film screenings take place over nine days. The Square is an open platform for connecting people and ideas, for brewing and sharing thoughts, to strengthen, evolve existing communities, and to forge new ones.

We the People was a part of Digitopia of the 10th Digital Art Festival Taipei, May 13 through 22, 2015. It was exhibited in a 12-by-12-meter space inside an repurposed factory building of the former national tobacco corporation, now ‘Songshan Cultural Park,’ a privatized high-end consumer wonderland of the ‘cultural creative industries’ of Taiwan. 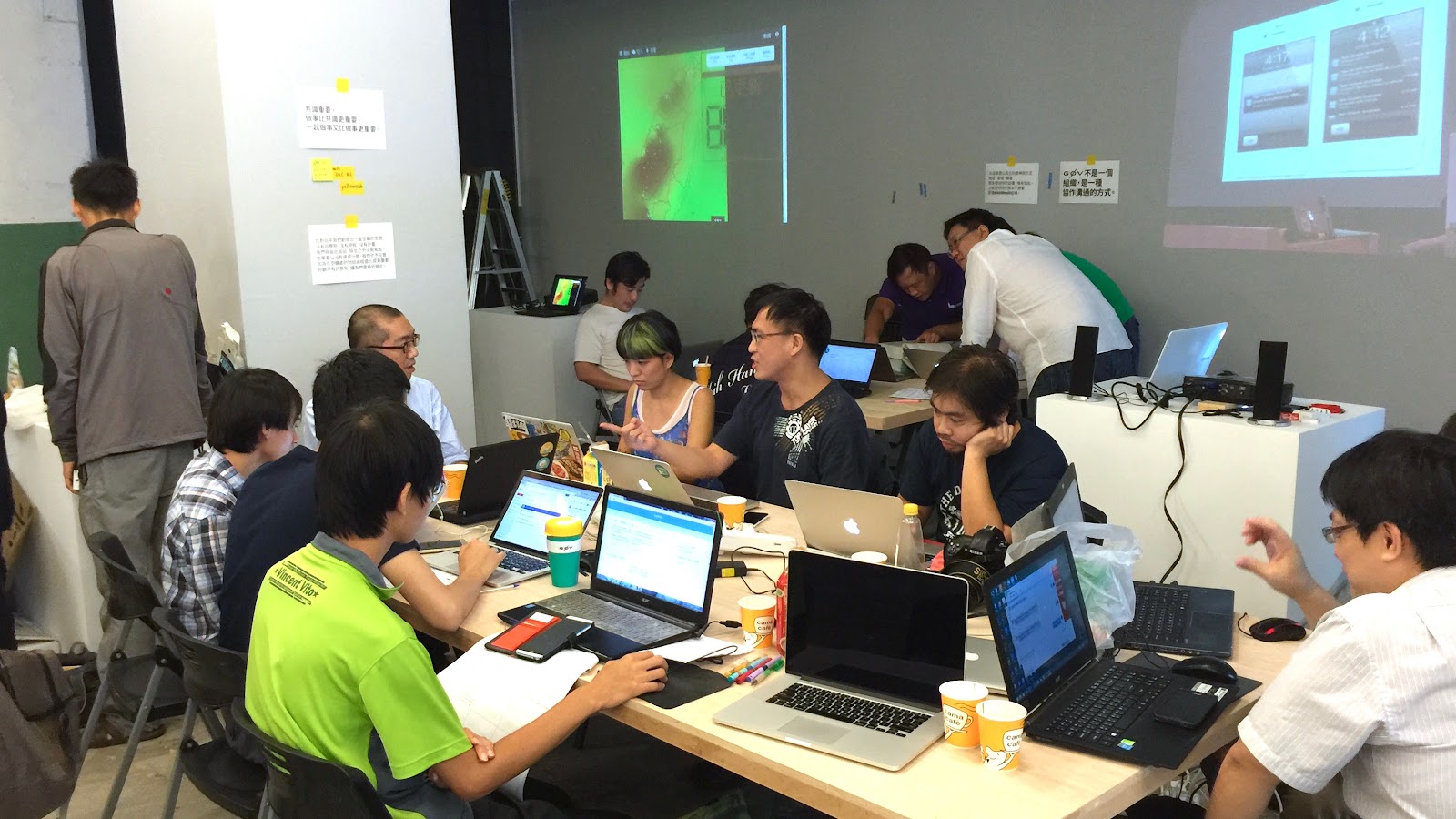 A hackathon taking place in Civic Square. A website displaying live air quality open data projected in the back. 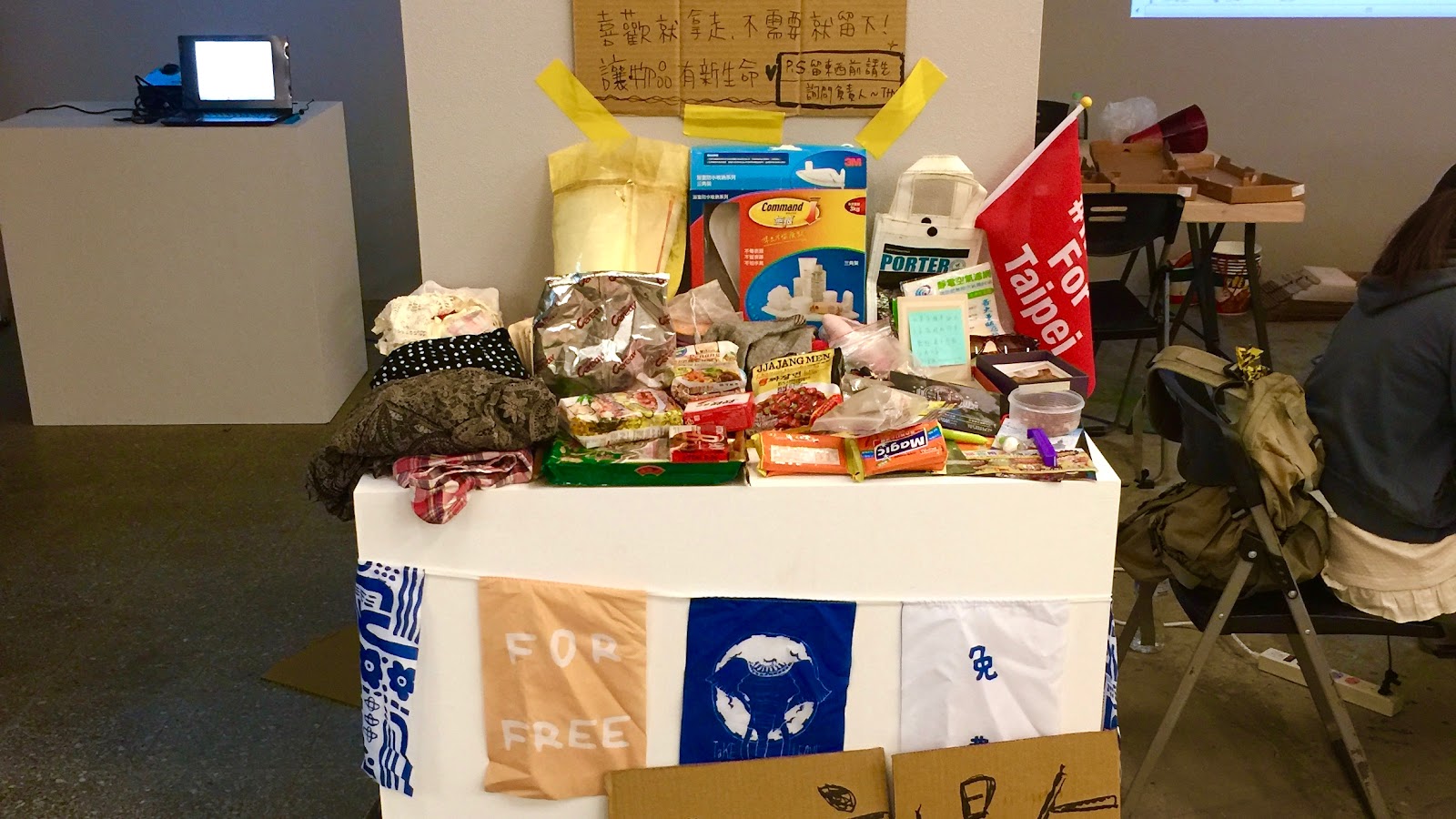 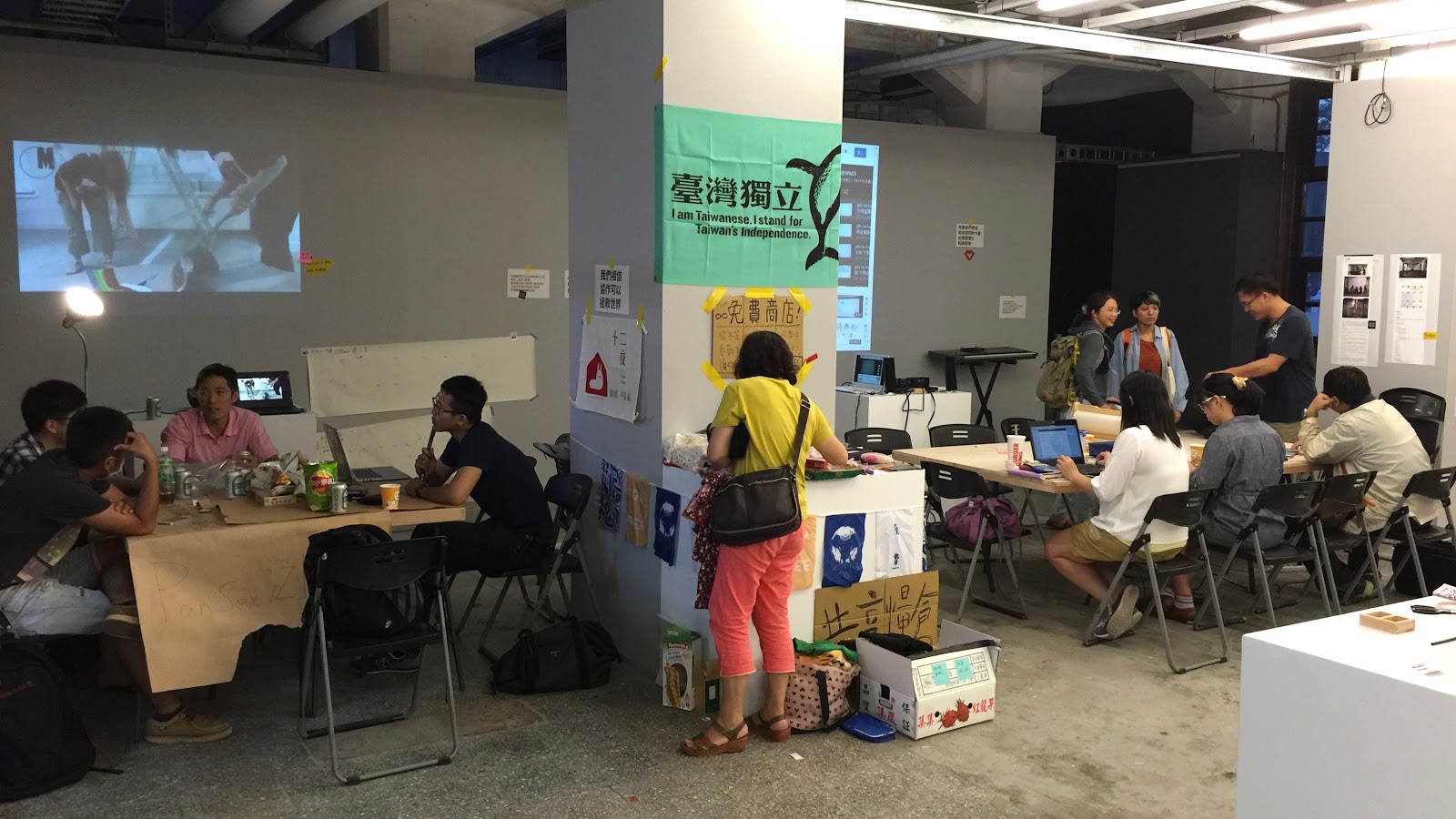 Multiple groups gathering within the ‘exhibition space’ for different activities.

A panorama of the Graph and the Manifesto.

A panorama of the entire ‘exhibition’ from a corner.